Reid Standish is a Canadian-American journalist based in London. He currently covers politics, security, and culture in Russia, Central Asia and across Eurasia. Follow him on Twitter: @ReidStan

(Top image: A horn player starts the festivities at an ethnic Uzbek wedding in Osh, Kyrgyzstan. Photo by Reid Standish.)

Originally from Langley, British Columbia, Canada, Reid Standish is a Canadian-U.S. journalist currently based in Moscow where he covers Russia and Eurasia for Foreign Policy magazine and various other English-language publications. His writing has been featured in The Atlantic, Politico Europe, The Washington Post, Coda Story, and others. He has also appeared as a commentator on MSNBC, Voice of America, BBC World Service, DW News and done podcasts with Radio Free Europe, Public Radio International, and Foreign Policy. 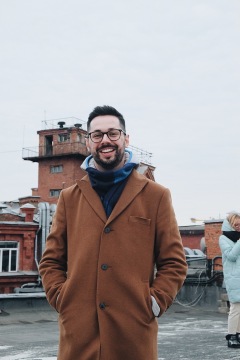 Reid has covered a wide variety of topics, from drug trafficking in Central Asia to Santa Claus tourism in northern Finland. In 2017, Reid was a Religion Fellow for the International Reporting Project where he reported on religious extremism in Kazakhstan and Kyrgyzstan and in 2019-2020, he was an Alfa Fellow in Moscow, where reported across Russia and the former Soviet Union.

Before moving to Kazakhstan, Reid worked as a northern Europe correspondent based in Helsinki, Finland and also previously worked at Foreign Policy magazine in Washington, DC as an editor where he reported, edited and commissioned pieces, and worked as the newsroom’s digital point person. In addition to Russia, Reid has lived in and reported from Kazakhstan, Finland, Lithuania, Latvia, Norway, Kyrgyzstan, Sweden and Ukraine.

(Top image: A mural dedicated to veterans from the Soviet war in Afghanistan erected in a village near Issyk-Kul, Kyrgyzstan. Photo by Reid Standish.)

Please fill out the form below if you want to contact Reid.