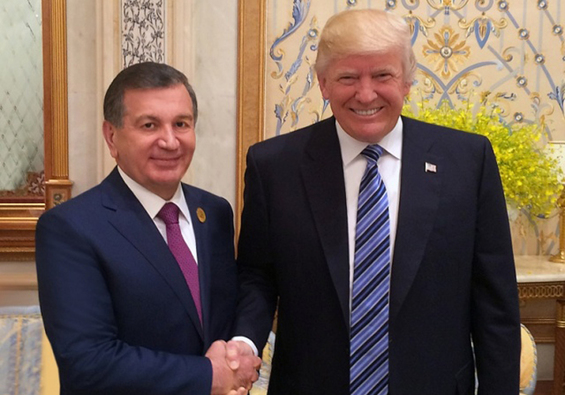 I’m shifting gear slightly with this latest newsletter to focus on a different part of the world: Central Asia. I have an op-ed out in the Washington Post about some interesting changes happening in Uzbekistan as the country’s president is welcomed at the White House today by Donald Trump. (https://www.washingtonpost.com/news/democracy-post/wp/2018/05/15/trump-has-a-chance-to-open-up-one-of-the-worlds-most-repressive-countries/?utm_term=.dd1247410c65)

Uzbekistan is one of the world’s most repressive countries, but Uzbek leader Shavkat Mirziyoyev has embarked on a tentative reform agenda to open up the country since taking power after the death of dictator Islam Karimov in 2016. I know it’s easy for something like to get lost in the noise of everything else happening in the world, but a Central Asian leader at the White House is a big deal. The point that I argue in the piece is that while we should all be skeptical of Mirziyoyev as he tells Western ears what they want to hear, the potential that this opening represents is real and should be pursued.

Good morning/good afternoon/good evening to everyone and greetings from a sunny (and warm!) Helsinki. If you’re new to this newsletter, good to have you and hope that you enjoy it. To everyone else, please send any feedback and hit me up with an email or tweet at me (@ReidStan) with any tips or suggestions. Also, please share this newsletter with anyone you think might be interested. New people can subscribe by clicking this link and entering their email here –> (tinyletter.com/ReidStandish).

1) This excerpt from Michael McFaul’s new book is a very interesting read. McFaul was Obama’s ambassador to Russia and an architect of the administration’s “reset” in relations with the Kremlin and this covers how quickly his tenure in Moscow was derailed. Come for the insights into the tragically strained U.S.-Russia relationship and stay for the fun anecdote about Obama telling Medvedev to “Stop fucking around with McFaul.”(https://www.washingtonpost.com/news/posteverything/wp/2018/05/11/feature/putin-needed-an-american-enemy-he-picked-me/?utm_term=.b47a47ef2898)

2) Christiana Figueres, who was the head of the U.N. Climate Change Secretariat when the landmark Paris accords were signed, had interesting comments and analysis about the future of Arctic oil. Her argument is that Arctic oil makes no economic sense to explore, partly because it is likely to take years to develop any finds. She argues for more investment into renewables to cut emissions and potentially slow the rapid pace of warming rather than putting more money into oil exploration up north. I’m not sure everyone will agree with her, but they’re interesting remarks. (https://uk.reuters.com/article/uk-oil-arctic/arctic-oil-undrillable-amid-global-warming-u-n-s-ex-climate-chief-idUKKCN1IG0OY)

3) The Guardian has a new piece about Finns’ love of libraries and reading. The piece focuses on the new state-of-the-art library being built in Helsinki and digs into some of the architecture and urban planning behind it. It’s an interesting read and always good to see that people somewhere are still reading books. (https://www.theguardian.com/cities/2018/may/15/why-finlands-cities-are-havens-for-library-lovers-oodi-helsinki?CMP=Share_iOSApp_Other)

– Andrii Artemenko, the Ukrainian politician who served as a self-styled diplomat to deliver a peace plan to Trump back in 2017 is being called to testify in front of a grand jury connected to special counsel Robert Mueller’s investigation. Artemenko, for those of you who don’t remember, tried to pass a peace plan for the war in Ukraine (which was slanted heavily in Russia’s favor) to Michael Flynn, who at the time was Trump’s National Security Advisor. A sit down was arranged by Felix Sater (a character with mob connections who worked as an informant for the CIA, FBI and DIA and orbited Trump world) with Trump lawyer Michael Cohen, who was then meant to pass the plan to Flynn. Of course, Flynn was fired and Cohen is in the spotlight for a host of shady behavior. I’m still not sure if the plan was ever passed and Sater, Cohen, and Artemenko have all changed their stories and they conflict with one another. But it’s interesting to see Artemenko get called in.

– I interviewed Artemenko back in 2017 (http://foreignpolicy.com/2017/04/18/trump-ukraine-russia-artemenko-war-peace-plan/) who defended his actions. He took a lot of heat for trying to shop this peace plan. Artemenko was ejected from his political party and Ukraine’s top prosecutor launched an investigation into whether he had committed treason. In May 2017, Ukrainian officials stripped him of his citizenship. But it’s interesting to look back at the ordeal in light of the news that Cohen was soliciting payments from companies to get Trump’s ear. I always wondered if money ever changed hands between Artemenko and the others.

– That incident also came in the foggy period shortly after Trump took office. For Ukraine, those early days were tough. They were hoping for Clinton to win — who was a longtime friend of Ukraine and a Russia-hawk — and were also boosting her chances of winning around Washington, according to a Politico piece (https://www.politico.com/story/2017/01/ukraine-sabotage-trump-backfire-233446). Afterwards the Ukrainians moved quickly to repair ties with Trump’s team and by all accounts have successfully done so. But there was an awkward period in February where lots of Ukrainian politicians were jostling for power and coming to Washington to take advantage of the chaos of Trump and push their own agendas. (http://foreignpolicy.com/2017/02/24/the-road-to-power-in-ukraine-runs-through-donald-trump/)

That’s all for now! I’ll be in touch in the following weeks as some new stuff I’ve been working on comes out.