It’s not easy living next to Russia these days. So with relations between the West and Moscow at a post-Cold War low point, Russia’s closest EU neighbors are turning to tougher military and financial measures to send a message to Vladimir Putin.

My latest piece for POLITICO Europe looks at how Russia’s Baltic and Nordic neighbors are dealing with the aftermath of the poisoning of double agent Sergei Skripal in the U.K. and the ensuing diplomatic fallout. The Danish government will hold hearings on passing its own version fo the Magnitsky Act next month and the Swedish opposition has put the law into its platform ahead of elections in September. Meanwhile, Finland is in the process of weighing some legislative changes to better protect against Russian “hybrid warfare.” Last week, Donald Trump hosted the Baltic presidents at the White House and he said that “getting along with Russia is a good thing, not a bad thing,” adding, “now, maybe we will [get along] and maybe we won’t.” Russia’s neighbors are betting on the latter scenario. Read the piece here –> (https://www.politico.eu/article/russia-anxious-northern-neighbors-toughen-up-nordic-baltic-military-defense-us-donald-trump-vladimir-putin/)

Good morning/good afternoon/good evening to everyone and welcome to another newsletter. As always, please send me your feedback. Hit me up with an email or tweet at me (@ReidStan) with any tips or suggestions. Also, please share this newsletter with anyone you think might be interested. New people can subscribe by clicking this link and entering their email here –> (tinyletter.com/ReidStandish).

Also, thanks for the tips last week about Norway. I’m off to Oslo on Thursday, let me know if you have recommended reading, especially about Norway and Russia/the Arctic.

1) This piece from Buzzfeed‘s Ben Smith about being a young reporter working in Belarus in the late 1990s and early 2000s is a great read and I highly recommend it. In addition to simply being an engaging first person read, it deals with some weighty themes about learning on the job that seem particularly pertinent today. Plus, Belarusian tractors! (https://www.buzzfeed.com/bensmith/ben-smith-the-mistakes-i-made-as-a-young-reporter?utm_term=.mtr5XRV51#.dojryb5r0)

2) After an Israeli missile raid that killed Iranian military personnel and an alleged chemical attack by the Assad regime, Syria is once again on the top of the White House agenda. It’s seems unlikely at this point that Trump will elect to respond with more than a targeted strike, but things look ready to escalate. The Washington Posthas a good rundown on the latest here. (https://www.washingtonpost.com/world/middle_east/syria-says-strike-on-military-base-carried-out-by-israeli-warplanes/2018/04/09/4179f3a2-2864-46ec-9b35-fef7c4eaf247_story.html?utm_term=.b928951c6fa3)

3) The Trump administration’s new sanctions on Russian oligarchs and top government officials began to bite this week as the rouble suffered its biggest daily fall in more than three years, the main Russian stock index slumped and investors dumped shares in businesses controlled by Oleg Deripaska, a Russian oligarch and Putin-ally who keeps showing up in Mueller’s probe. I’ve been skeptical about how effective sanctions can really be in terms of changing the Kremlin’s behavior, but drops like this can’t really be ignored. (https://www.theguardian.com/business/2018/apr/09/russian-firms-and-rouble-hit-heavily-by-trump-sanctions) 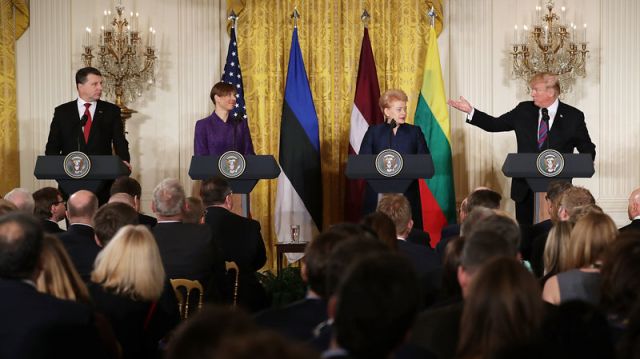 (Tump hosting the Baltic presidents. This was spoofed on the latest SNL during the cold open: (https://www.youtube.com/watch?v=1iCm8tYX-Vw)

1) In case you missed it last week, here is my report from northern Finland looking at the Nordic country’s latest plans for the Arctic. (https://www.politico.eu/article/finlands-race-for-arctic-riches-resources-shipping-lanes-high-north/)

2) On a similar theme, Keith Johnson and I looked at the prospects of the Northern Sea Route, a sea lane connecting Europe to Asia that is opening up faster than expected due to climate change. (http://foreignpolicy.com/2018/03/08/putin-and-xi-are-dreaming-of-a-polar-silk-road-arctic-northern-sea-route-yamal/)

3) This isn’t one of my latest, but it was almost one year ago that I was in Central Asia reporting in Kazakhstan and Kyrgyzstan, so I thought I’d re-up some of my work from that trip.

–> Looking at extremism and oppression in Kazakhstan (http://foreignpolicy.com/2017/08/01/central-asia-kazakhstan-eurasia-terrorism-extremism-isis-al-qaeda/)

–> The human side of China’s Belt and Road in Central Asia (http://foreignpolicy.com/2017/09/12/silk-road-marriage-china-kazakhstan-trade-economy/)

– Poland gets most of the attention for its laws aimed at muffling or rewriting history about the Holocaust, but Lithuania is also an active participant. Last week the country’s parliament is preparing to vote on a government-sponsored bill that would ban selling material that “distorts historical facts” that is believed to be targeted specifically at the country’s role in the Holocaust (https://www.timesofisrael.com/lithuanian-bill-would-ban-books-critical-of-the-country/).

– The days are getting long, the sun is out, and Helsinki is a swampy 6C degrees. Finnish Spring has arrived!

That’s all for now. Have a good week.