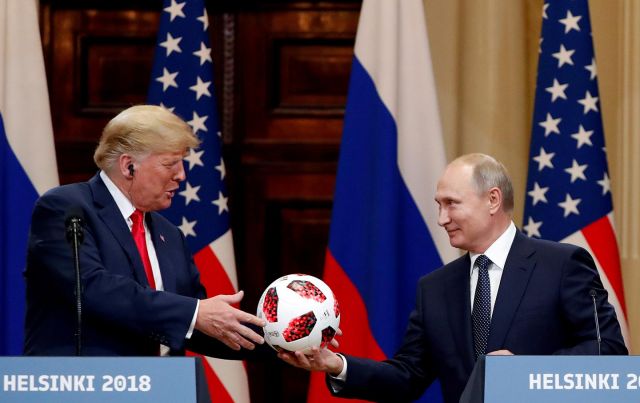 The Trump and Putin show has come and gone from Helsinki, but the fallout from that surreal meeting in Finland is just starting now. I have a new piece out in the The Atlantic about what it was like to be in that press conference between with the two presidents and it means for the new era that we’re entering into now:

“During the press conference, it was clear that Putin was in charge. Not only did he deny any Russian interference in U.S. politics, he confidently twisted the truth and trolled the American press corps in his answers. Putin, who has been essentially running Russia for 18 years, has managed to silence and intimidate the Russian press with methods ranging from commercial to violent, and next to him Trump’s own repeated cries of “fake news” against critical coverage looked almost quaint. It was a press conference hosted by a man who has eviscerated press freedom at home and one who, if his rhetoric is any indication, seems to want to but can’t quite manage it. And for 45 minutes they both had to deal with the media—and the media with them.”

You can read the entire article here: https://www.theatlantic.com/international/archive/2018/07/trump-putin-cable-news-carnival/565400/

Good morning/good afternoon/good evening to everyone. Welcome back! And if you’re new to this newsletter, pleasure to have you. As always, send me any feedback or tips by email or tweet (@ReidStan). Also, don’t forget to share this newsletter with anyone you think might be interested. New people can subscribe by clicking this link and entering their email here –> (tinyletter.com/ReidStandish).

It was a wild few weeks in the lead up to this meeting and an even crazier few days during the main event, which meant I wasn’t able to send out one of these on Monday or Tuesday. So, here’s a little bit of catch up:

1) I was on BBC world service both before and after the press conference on Monday. You can listen to my sleep-deprived take right after getting out of the ballroom of the presidential palace here. (https://www.bbc.co.uk/programmes/w172w60twkz8n0n)

2) Here is my curtain-raiser on the day before the summit for The Atlantic, looking at how the meeting has been set up as a “historic, yet potentially hollow event.” (https://www.theatlantic.com/international/archive/2018/07/helsinki-summit-trump-putin/565220/)

3) I did this article right after the meeting was officially announced. It’s a look at Finland’s long history of holding summits of this stature and what this latest one meant for the Finns. (https://www.theatlantic.com/international/archive/2018/06/finland-helsinki-russia-trump-united-states-summit/564074/).

4) Finally, here’s a piece in advance of the summit for POLITICO Europe trying to capture the mood of Helsinki as it prepared to welcome two of the most controversial men in the world. (https://www.politico.eu/article/donald-trump-vladimir-putin-helsinki-summit/)

1) Trump was in damage control almost immediately upon leaving Helsinki and last night he tried to walk back some of what he said, but then also weirdly doubled-down on everything he had said before. It was vintage Trump. Now he’s trying to talk up his meeting with Putin and telling people to expect “big results.” The Helsinki summit was mostly for show, it was about optics and ego and I can’t imagine that it will be easy for Trump to actually offer much besides leeway. For Putin, he must be thinking after Helsinki that the handcuffs are off, and to be honest, he’s probably right. (https://in.reuters.com/article/usa-russia-summit-trump/trump-says-big-results-will-come-with-putin-idINKBN1K8150)

2) Trump went on Tucker Carlson last night and decided to undermine NATO again by doubting the value of Article 5, the provision of the alliance that says that an attack on one country is an attack on all of them. He specifically went after new member Montenegro: “Membership in NATO obligates the members to defend any other member that’s attacked. So let’s say Montenegro, which joined last year, is attacked. Why should my son go to Montenegro to defend it from attack?” (https://www.euractiv.com/section/politics/news/why-die-for-montenegro-trump-asks/)

3) Lost in the shuffle of everything else is the story of a 29-year-old Russian woman with ties to the NRA who was arrested in the U.S. on Monday for conspiring to act as an agent of the Russian government. This piece is a first person story from a journalist who interacted with her in the final weeks before Trump’s election in 2016. (http://www.france24.com/en/20180717-lunch-alleged-russian-spy-maria-butina-nra-torshin-trump-2016-election?ref=tw)

– After Trump’s comments about Montenegro, I can’t help but think that some portion of the unrecorded one-on-one with Putin in Helsinki was about the Balkans. I can’t imagine Trump cares much about that part of the world, but it’s an area of EU and NATO expansion and one that has strong historical and strategic value for Russia. Greece recently kicked out some Russians who were trying to meddle in its politics and Montenegro foiled a Russian-linked attempt at a coup last year. Also, Macedonia has been promised NATO membership if it can figure out the name change issue with Greece and they have also sounded the alarm about Russian attempts to destabilize its politics. So, keep your eyes on the Balkans.

– This Vanity Fair piece is quite astounding, Apparently John Kelly, Trump’s disgruntled chief of staff, personally lobbied Congressional Republicans to publicly rebuke Trump after his press conference with Putin. I think that should speak volumes about how screwed up things are in the White House right now.

– After the summit ended on Monday, Finnish President Sauli Niinistö was seen having a beer with senior aides just around the corner from the presidential palace at a normal neighborhood spot. I think we all badly needed a drink after that meeting.